Solid, surface, and mesh objects offer different functionality, that, when used together,
offer a powerful suite of 3D modeling tools. For example, you can convert a primitive
solid to a mesh to take advantage of mesh creasing and smoothing. You can then convert
the model to a surface to take advantage of associativity and NURBS modeling.

A solid model is a volume that represents a 3D object, and has properties such as
mass, center of gravity, and moments of inertia. You can create 3D solids from primitive
solids such as cones, boxes, cylinders, and pyramids, or by extruding, revolving,
sweeping, or lofting closed 2D objects as shown. 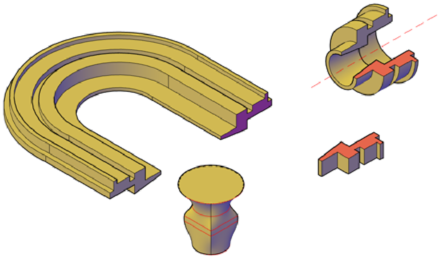 You can also combine 3D solids using Boolean operations such as union, subtract, and
intersect. The illustration below shows two solids that were extruded from closed
polylines, and then combined by intersecting them.

A typical modeling workflow is to create basic models using mesh, solids, and procedural
surfaces, and then convert them to NURBS surfaces. This allows you to utilize not
only the unique tools and primitive shapes offered by solids and meshes, but also
the shaping capabilities provided by surfaces – associative modeling and NURBS modeling. 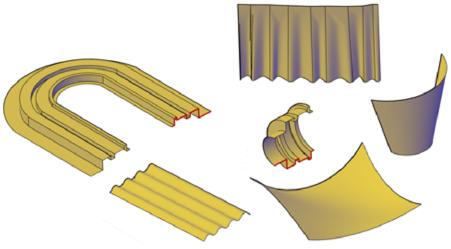 You create surface models using some of the same tools that you use for solid models:
sweeping, lofting, extruding, and revolving. You can also create surfaces by blending,
patching, offsetting, filleting, and extending other surfaces.

A mesh model consists of vertices, edges, and faces that use polygonal representation
(including triangles and quads) to define a 3D shape. 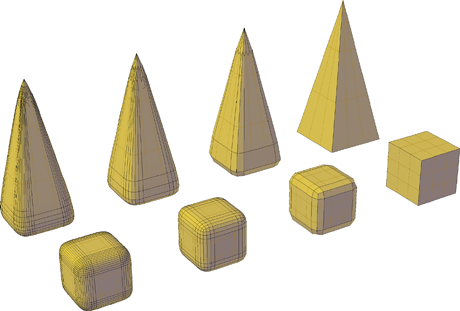 Unlike solid models, mesh has no mass properties. However, as with 3D solids, you
can create primitive mesh forms such as boxes, cones, and pyramids, starting with
AutoCAD-based products 2010 or later. You can modify mesh models in ways that are
not available for 3D solids or surfaces. For example you can apply creases, splits,
and increasing levels of smoothness. You can drag mesh subobjects (faces, edges, and
vertices) to shape the object. To achieve more granular results, you can refine the
mesh in specific areas before modifying it.

Use mesh models to provide the hiding, shading, and rendering capabilities of a solid
model without the physical properties such as mass, moments of inertia, and so on.

sppes of 3D Models. Wireframe modeling is useful for initial design iterations and as reference geometry, serving as a 3D framework for subsequent modeling or modification. Solid modeling is efficient to use, easy to combine primitives and extruded profiles, and offers mass properties and sectioning capabilities.3D computer graphics, 3D modeling (or three-dimensional modeling) is the process of developing a mathematical representation of any surface of an object (either inanimate or living) in three dimensions via specialized software.modeling is fully described in 3‑D space; objects can be viewed from any angle. Solid modeling (or modelling) is a consistent set of principles for mathematical and computer ….. Solid modeling software creates a virtual 3D representation of components for machine design and analysis. A typical …3D images and turning them into physical objects—specifically with 3D printing—the science behind it is called 3D modeling.3D modeling is a manner of creating 3 dimensional objects. When it comes to 3D printing, 3D modeling is often done through a 3D files can be affected to the …model for a 3D printer with Tinkercad. … 3. Combine. Group together a set of shapes to create models as detailed as you want.3D models for your project in our vast online catalog of cars, people, textures, architectural models and more.3D modeling: This definition explains what 3D modeling is and how it is done … of software to create a virtual three-dimensional model of some physical object.3D–modeling software for Windows, Mac OS, and Linux, Open SCAD focuses more on the CAD aspects of modeling an object rather than the artistic …… According to Wikipedia, “3D modeling is the process of developing a mathematical, wireframe representation of any three-dimensional object, … 2017-06-15