The complexity of an object relates to the number of its vertices and faces. The
more faces a model has, the longer it takes to render. Keep the geometry of your drawing
simple to keep rendering time to a minimum. Use the fewest faces possible to describe
a surface.

Intersecting faces in a model occur when two objects pass through one other. For
conceptual design situations, simply placing one object through another is a fast
way to visualize how something will look. However, the edge created where the two
objects intersect can exhibit a rippled appearance.

In the following example, the edge appears rippled in the left image and much cleaner
after a Boolean union. 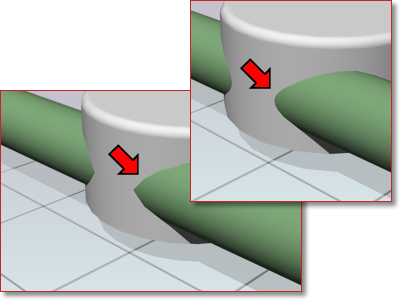 When edges do not appear to be as precise as you want, use Boolean operations like
union, intersect, and subtract. A much cleaner and precise edge is created to better
reflect the objectâ€™s appearance.

Faces that overlap and lie in the same plane, coplanar faces, can produce ambiguous results, especially if the materials applied to the two faces
differ.

In the following example, artifacts appear when faces occupy the same location.

Moving an object so its faces no longer occupy the same plane as another object will
fix this situation.

Faces that overlap themselves due to a 180-degree twist can also produce ambiguous
results, because the normal for the face is not well defined.

In the following example, artifacts appear where the face is twisted due to crossing
the second and third corner points. 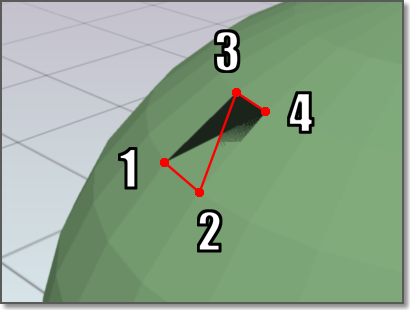 This situation is often encountered when you try to fix a hole the surface of a model.
For example, when corner points are selected for the new face, the points are crossed
instead of being placed around the hole in a counter-clockwise direction (3DFACE command).
Avoid this problem by choosing corner points in the proper order.

rtain kinds of geometry create special rendering problems. The complexity of an object relates to the number of its vertices and faces. The more faces a model  … 2017-06-15