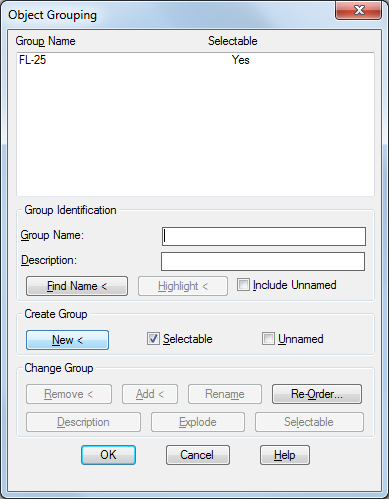 Displays the names of existing groups.

Displays the name and description (if any) of the group selected in the Group Name
list.

Specifies the group name. Group names can be up to 31 characters long and can include
letters, numbers, and the special characters dollar sign ($), hyphen (-), and underscore
(_) but not spaces. The name is converted to uppercase characters.

Displays the description of the selected group, if there is one.

Lists the groups to which an object belongs.

The Group Member List dialog box is displayed, showing the groups to which the object
belongs.

Shows the members of the selected group in the drawing area.

Specifies whether unnamed groups are listed. When this option is cleared, only named
groups are displayed.

Creates a new group from the selected objects, using the name and description under
Group Name and Description.

Specifies that a new group is selectable.

Indicates that a new group is unnamed. A default name, *An, is assigned to unnamed groups. The n represents a number that increases with each new group.

Removes objects from the selected group. To use this option, clear the Selectable
option.

If you remove all the group’s objects, the group remains defined. You can remove the
group definition from the drawing by using the Explode option.

NOTE: When you remove objects from a group and then later add them back during the same
drawing session, they are returned to their previous position in the numerical order
of the group.
Add

Adds objects to the selected group.

Renames the selected group to the name entered in Group Name under Group Identification.

Displays the Order Group dialog box, in which you can change the numerical order of
objects within the selected group. Objects are numbered in the order in which you
select them for inclusion in the group. Reordering is useful when creating tool paths.
For example, you can change the cut order for the horizontal and vertical lines of
a tool path pattern.

Updates the selected group’s description to the name that you enter in Description.
You can use up to 64 characters for a description name.

Deletes the definition of the selected group. The group’s objects remain in the drawing.

Specifies whether the group is selectable.

e Group Member List dialog box is displayed, showing the groups to which the object belongs. Shows the members of the selected group in the drawing area.group dialog box is nowhere to be … to select objects or [Name/Description]: –group gets me command line as …group. Remove from Position (0-n) Specifies the current position of the object to reorder. Enter New Position …Object grouping Dialog Box is right.Group using the dialogue box. It's not there in 2012 at least I couldn't find out how to turn it …group. In the Object Grouping dialog box, select the group name from the list of groups. Under Change Group, select Explode. Click OK. The group is deleted.Object grouping check box in the Selection Modes area of the Selection tab in the Options dialog box. Use the GROUP tool to …Object Grouping dialog box.Group Options Dialog Box · Change in Record Selection Formula Detected Dialog Box · Change Summary … Insert Object Dialog Box · Insert Subreport …Dialog Box. About Microsoft Visual FoxPro Dialog Box … Group Header Dialog Box · Having Dialog Box … Insert Object Reference Dialog Box · Insert System … 2017-06-19