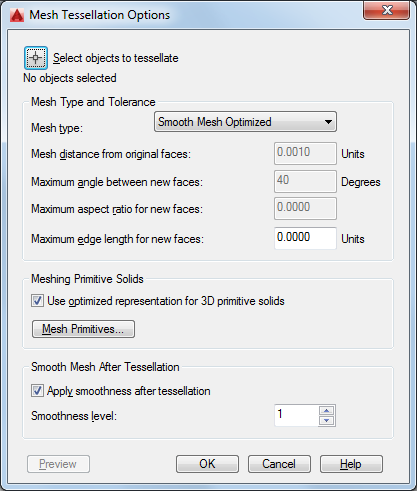 The defaults that you set in the Mesh Tessellation Options dialog box control the
appearance of objects that you convert to 3D mesh objects. For a complete list of
objects that can be converted to mesh, see the MESHSMOOTH command.

Temporarily closes the dialog box so that you can select an object to convert to a
mesh object. You can select 3D solids, 3D surfaces, 3D faces, polygon or polyface
meshes, regions, and closed polylines.

Specifies the default properties of objects that are converted to 3D mesh objects.
Settings that increase the number of mesh faces can slow program performance.

Specifies the type of mesh to be used in the conversion. (FACETERMESHTYPE system variable)

Sets the maximum deviation of the mesh faces from the surface or shape of the original
object. Smaller values result in less deviation, but create more faces and might affect
program performance. (FACETERDEVSURFACE system variable)

Increasing this value increases the density of the mesh in areas of high curvature,
and decreases the density in flatter areas. If the value of Mesh Distance from Original
Faces (FACETERDEVSURFACE) is high, you can increase the maximum angle value. This
setting is useful if you want to refine the appearance of small details such as holes
or fillets.

Use this value to prevent long, slivered faces. You can specify the following values:

This option does not affect faces that are planar before conversion.

Sets the maximum length of any edge that is created during a conversion to a mesh
object. (FACETERMAXEDGELENGTH system variable)

With the default value 0 (zero), the size of the model determines the size of the
mesh faces. Setting larger values results in fewer faces and less accurate adherence
to the original shape, but improves program performance. You can improve conversions
that result in long, slivered faces by decreasing this value.

Specifies which settings to use when you convert 3D solid primitive objects to mesh
objects.

Specifies which settings to use when you convert primitive solid objects to mesh objects.
(FACETERPRIMITIVEMODE system variable)

This button is available only when Use Optimized Representation for 3D Primitive Solids
is selected.

Specifies what level of smoothness is applied to objects after they are converted
to mesh.

When the Mesh Type option is set to Mostly Quads or Triangle, the converted mesh objects
have no smoothness. The following settings are not available for those conversions.

Sets whether the new mesh objects are smoothed after they are converted.

Enter 0 to eliminate smoothness. Enter a positive integer for increased degrees of smoothness.

This option is available only when Apply Smoothness After Tessellation is selected.

Displays the effect of the current settings in the drawing area. Press Enter to accept
the changes.