Specifies the import settings for a DGN file. 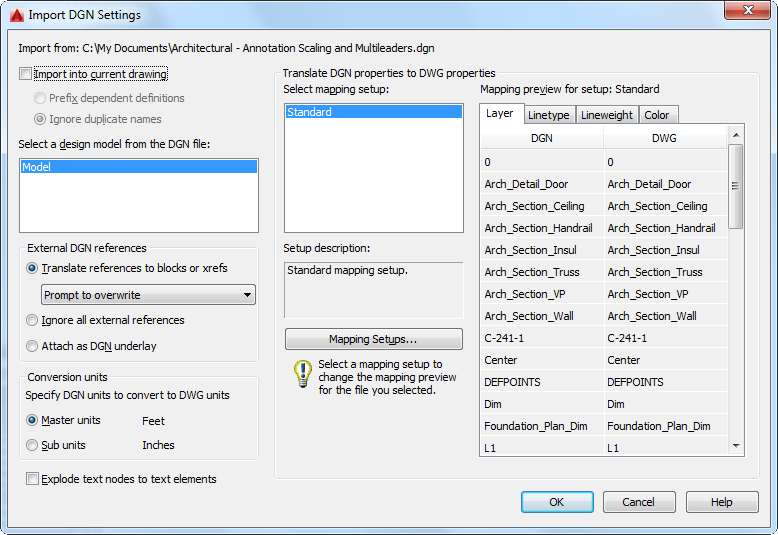 Inserts the contents of the DGN file into the current DWG file.

Adds the DGN file and model name as a prefix to the incoming objectâ€™s name. If the
prefixed name results in a new name conflict, then an incremental number is appended
to the name.

Ignores any duplicate named objects, such as layer names or dimension styles, in the
DGN file and gives precedence to the existing definition for duplicates.

You can also control the default settings using the DGNIMPORTMODE system variable.

NOTE: For the correct display of linetypes, the MicroStation RSC (resource file) that is
referenced by the DGN file must be available on your computer in a valid AutoCAD Support
File Search Path when you import or attach the DGN file. If the resource file is not
found, you will get an error message. You can define a search path location in the
OPTIONS command, Files tab. You can add a path to the AutoCAD Support File Search
Path node. You can also copy the RSC file to an existing Support File Search Path.

Select a Design Model from the DGN file

The DGN design model that you select is imported into the model space of your current
DWG file.

Controls how DGN references are handled in a DWG environment.

Any DGN files are supported as references. These file types include, but not limited
to, these extensions: .dgn, .dwg,.cel,.s,.h, .cgm,.rdl,.d files. However, DXF files are not supported and are ignored.

Translate References to Blocks or Xrefs

All referenced DGN design models, including nested references, are converted into
blocks or attached as xrefs in model space.

Design model references to sheet models, and sheet model references to other sheet
models are not supported and are ignored. Unique names for references are generated
by appending the model name to the design file name separated with a dash (-). If
necessary, the resulting block names are truncated and one or more of the last characters
might be replaced with numerals to make the file name unique.

With the following set of options, you can choose whether or not to overwrite external
reference files:

If you are importing a DGN file that uses custom line styles and those line styles
are defined in an external .rsc file, then the .rsc file needs to be included in the
AutoCAD support path.

Referenced DGN and DWG files that are external to the specified DGN file are not included in the resulting DWG file.

All DGN external references in the DGN file are imported as DGN underlays in the resulting
DWG file. Referenced DWG files remain xrefs when imported.

NOTE: New DWG files are created in this process. These new DWGs are not automatically deleted.

Specifies that one master unit of the imported DGN file converts to one DWG drawing
unit.

Specifies that one sub-unit of the imported DGN file converts to one DWG drawing unit.

NOTE: The master units and the sub-units of the selected DGN file are displayed next to
the buttons for reference.

Text node elements in a DGN file are multiple lines of text stored as one element, and are similar to
MTEXT objects. Check this option to maintain text which follows a path.

When cleared, multiple lines of text are maintained as a single multiline text object.

When checked, multiple lines of text are separated into individual text objects. Select
this option to maintain visual fidelity when you import a DGN file that includes text
created along a curved path. The first character determines the location and rotation
of the text object.

Selects and manages the mapping setup used on the current DGN import.

Standard is the default mapping setup which extracts data from the drawing being exported
and applies an automatic mapping to DGN layers, linetypes, lineweights, and colors,
as shown in the mapping preview.

Displays the description of the selected mapping setup.

Lists all properties of both the imported DGN file in the DGN column and the selected
mapping setup in the DWG column.

NOTE: External reference files properties are not listed in a mapping preview.