Controls how objects are processed when exporting them to a DGN file. 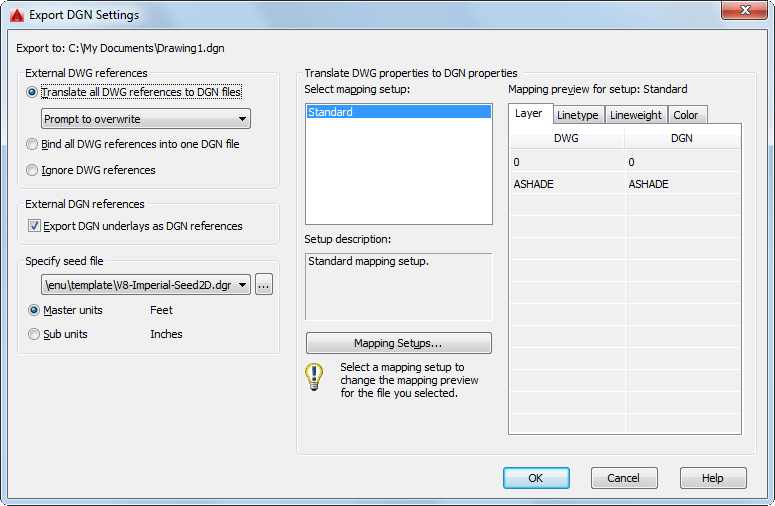 Controls how xrefs are processed.

All referenced DWG files, including nested DWG references, are converted into DGN
files. The resulting DGN files use the same file name as the DWG files, but use a
.dgn file extension.

With the following set of options, you can choose whether or not to overwrite DGN
reference files

Bind All DWG References into One DGN file

Referenced DWG files are not included in the resulting DGN file.

Controls whether DGN underlays in the DWG file are exported as DGN references of the
resulting DGN file.

Do not export drawings that include V8 DGN underlays to a V7 DGN format file. The
V8 DGN references cannot display in a V7 DGN file because the V8 DGN file format is
not a valid design file for the resulting V7 DGN file.

A seed file for a DGN file is similar to a drawing template (DWT) file that contains default
settings and attributes, such as working units. Selecting the appropriate DGN seed
file (imperial, metric, or user-defined), and conversion units is critical to the
translation from DWG to DGN. In addition, the seed file contains settings that are
not present in a DWG file, and therefore inherited in the exported DGN.

These settings include working units and resolution as well as whether the file is
2D or 3D.

Select the appropriate conversion units for the translation. The DGN seed file contains
working units (imperial or metric) called master units and sub-units. One DWG unit is converted to either one master unit or one sub-unit.

Specifies that one DWG drawing unit will convert to one master unit of the specified
DGN seed file.

Specifies that one DWG drawing unit will convert to one sub-unit of the specified
DGN seed file.

NOTE: The master units and the sub-units of the selected DGN seed file are displayed next
to the buttons for reference.
Filename drop-down list

Specify the name of the DGN seed file. Several sample seed files are provided upon
installation.

Displays the Select Seed File dialog box (a Standard File Selection Dialog Boxes),
in which you can select the DGN seed file.

See the DGNEXPORT Conversion Table specific details about the scope of exporting DWG
objects and other data to DGN files.

The following table lists the default DGN seed files and their settings. You may need
to edit these settings or obtain the appropriate seed file to suit your conversion
requirements.

Selects and manages the mapping setup used on the current DGN export.

Standard is the default mapping setup which extracts data from the drawing being exported
and applies an automatic mapping to DGN layers, linetypes, lineweights, and colors,
as shown in the mapping preview.

Displays the description of the selected mapping setup.

Lists all properties of both the exported DWG file in the DWG column and the selected
mapping setup in the DGN column.

NOTE: The reference properties are not listed in the preview, but any properties that apply
to those references that are shown in the mapping preview are applied to the references
as well.