Differentiating Between Local and Global Variables

Differentiating Between Local and Global Variables

This lesson discusses the use of local variables versus global document variables.
Global variables are accessible by all functions loaded within a document (or drawing).
These variables may retain their value after the program that defined them completes.
Sometimes, this is what you want. You’ll see an example of this later in the tutorial.

Local variables retain their value only as long as the function that defined them
is running. After the function finishes running, the local variable values are automatically
discarded, and the system reclaims the memory space the variable used. This is known
as automatic garbage collection, and is a feature of most LISP development environments,
such as Visual LISP. Local variables use memory more efficiently than global variables. 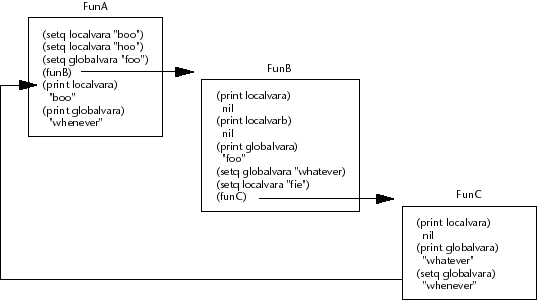 Because of the advantages cited, this tutorial uses local variables almost exclusively.

NOTE:If you have been working with AutoLISP

for some time, you may have developed the practice of using global variables during
development to examine your program while you are building it. This practice is no
longer necessary, given the powerful debugging tools of Visual LISP.