About Vector Length and Direction Codes

About Vector Length and Direction Codes

Each vector length and direction code is a string of three characters. The first
character must be a 0, which indicates to the program that the next two characters
are interpreted as hexadecimal values. The second character specifies the length of
the vector in units. Valid hexadecimal values range from 1 (one unit long) through
F (15 units long). The third character specifies the direction of the vector. The
following figure illustrates the direction codes. 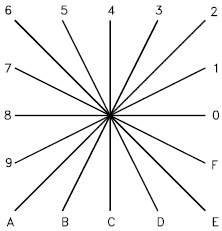 All the vectors in the preceding figure were drawn with the same length specification.
Diagonal vectors stretch to match the X or Y displacement of the closest orthogonal vector.

The following example constructs a shape named DBOX with an arbitrarily assigned shape
number of 230.

The preceding sequence of specification bytes defines a box one unit high byone unit
wide, with a diagonal line running from the lower left to the upper right. After saving
the file as dbox.shp, use the COMPILE command to generate the dbox.shx file. Use the LOAD command to load the shape file containing this definition, and
then use the SHAPE command as follows:

The resulting shape is shown in the following illustration.