When you render a model, the density of the mesh affects the smoothness of surfaces.

Mesh objects are comprised of the following components:

In a drawing, all faces have three vertices, except faces in polyface meshes, which
are treated as adjoining triangles. For rendering purposes, each quadrilateral face
is a pair of triangular faces that share one edge.

Smoothing of an object is handled automatically by the renderer. Two types of smoothing
occur during the rendering process. One smoothing operation interpolates the face
normals across a surface. The other operation takes into account the number of faces,
or face count, that make up the geometry; greater face counts result in smoother surfaces but longer
processing times.

While you cannot control the interpolation of face normals, you can control the display
accuracy of curved objects by using the VIEWRES command and FACETRES system variable.

The VIEWRES command controls the display accuracy of curved 2D linework such as circles
and arcs in the current viewport. 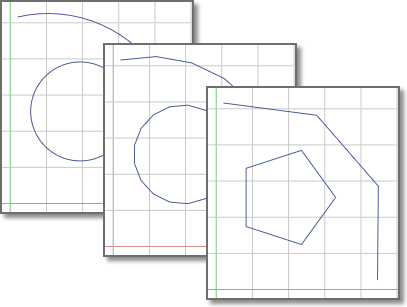 These objects are drawn on the screen using many short straight line segments. Smoother
arcs and circles result from higher VIEWRES settings, but they take longer to regenerate.
To improve performance while you’re drawing, set a low VIEWRES value.

FACETRES controls the mesh density and smoothness of shaded and rendered curved solids.

In the following example, facets are displayed on curved geometry when FACETRES is
low (FACETRES = .25). 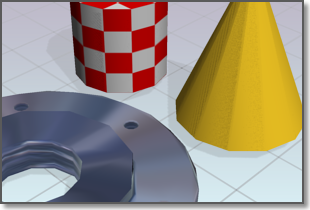 In the following example, smoother geometry is displayed when FACETRES is set to a
higher value (FACETRES = 5). 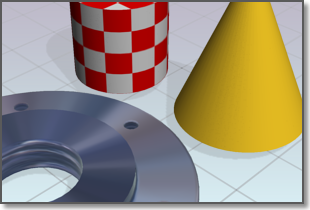