The resolution of a rendered image can be set by specifying a width and height, in
pixels.

There are three resolution settings that control how a rendered image appears; the
width, height, and image aspect ratio.

The width and height settings control the size of the rendered image, measured in
pixels. A pixel (short for Picture Element) is a single point in a raster image.

The default output resolution is 640 x 480 and can be set as high as 12,000 x 12,000.
Higher resolution settings result in smaller pixels and finer detail, but also increases
the time it takes to generate a rendered image and size of the image file.

Output resolutions that are set in the Render to Size Output Settings dialog box are
saved with the current drawing and displayed on the drop-down menu of the Render to
Size control on the Render panel of the ribbon. Use a lower resolution setting (320
x 200 or lower) when testing a rendering. As you add details and materials, shift
to a mid-range resolution setting, such as 640 x 480. The final presentation rendering
should use the highest resolution required by a project (1024 x 768 or greater) or
the media in which the rendered image will be used.

Aspect ratio describes the proportions of the rendering, expressed as the ratio of
width to height, regardless of the image’s resolution. Aspect ratio is usually expressed
either as a ratio of width over height (for example, 4:3) or as a multiplier (such
as, 1.333). For example, an image that is 800×600 pixels has an aspect ratio of 4:3
meaning the image is 4 pixels wide for every 3 pixels it is high.

If you lock the image aspect, the width and height are tied together; changing one
automatically changes the other while maintaining the aspect ratio. 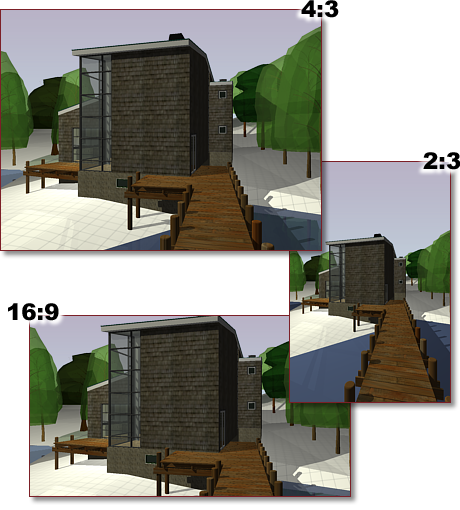