About Nesting and Overlaying Referenced Drawings

About Nesting and Overlaying Referenced Drawings

Attached DWG references (xrefs) can be nested: that is, you can attach an xref that
contains another xref.

Xrefs can be nested within other xrefs: that is, you can attach an xref that contains
another xref. You can attach as many copies of an xref as you want, and each copy
can have a different position, scale, and rotation. 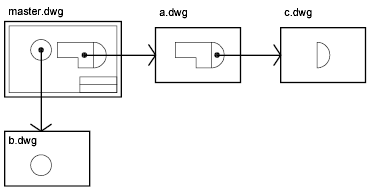 You can also overlay an xref on your drawing. Unlike an attached xref, an overlaid
xref is not included when the drawing is itself attached or overlaid as an xref to another drawing.
Overlaid xrefs are designed for data sharing in a network environment. By overlaying
an xref, you can see how your drawing relates to the drawings of other groups without
changing your drawing by attaching an xref. 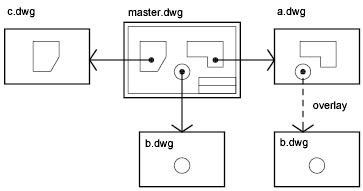 NOTE: When using the parametric drawing feature, you can only constrain objects in the
drawing to the insertion point of an Xref, and not its nested objects.

The saved path for an xref can be a full path, a relative (partially specified) path,
or no path. For a nested xref, a relative path always references the location of its
immediate host and not necessarily the currently open drawing.