Use the same methods to modify a face, edge, or vertex that you use to modify the
entire object:

When you move, rotate, or scale a subobject, the subobject is modified in a way that
maintains the integrity of the 3D solid or surface. For example, when you drag an
edge to move it, the adjacent faces are adjusted so that they remain adjacent to the
edge. 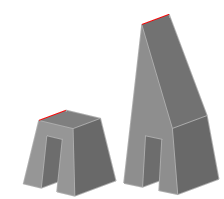 Several results are possible when you modify a solid or surface. When you move, rotate,
or scale subobjects, you can press Ctrl one or more times as you drag to cycle through
modification options.

The following illustration shows the modification options for moving a face.

When you modify composite solids, the effect of the edits depends on the current setting
of the History property.

Rules and Limitations When Moving, Rotating, and Scaling Subobjects on 3D Solids

You can only move, rotate, and scale subobjects on 3D solids if the operation maintains
the integrity of the solid. The following rules and limitations apply to moving, rotating,
and scaling subobjects:

>Move, rotate, and scale individual subobjects on 3D solids and surfaces. Use the same methods to modify a face, edge, or vertex that you use to modify the …Rotation, and Size of Faces on a 3D Solids and Surfaces. cube with top face moved, … If you move, rotate, or scale a face on a 3D solid primitive, the solid primitive's history is removed. … Commands for Editing Subobjects …to move, rotate, and scale 3D objects using the 3D gizmo.3D Scale Gizmo shortcut menu offers options for aligning, moving, … With the 3D Scale gizmo, you can resize selected objects and subobjects along an … and Scaling 3D Subobjects · About Moving, Rotating, and Scaling Faces on 3D …moved, rotated, and scaled. … of an object's position, orientation, or scale, relative to the 3D world (or world space) in which you're working.moves the model in the X axis, the green arrow in the Y axis and the blue arrow in the Z axis.3D using the Move, … Rotate and Scale gizmos. You will also learn how to select parts …of 3D objects,  … 2017-06-15