Several methods are available for editing splines and changing their underlying mathematical
parameters.

You can edit splines using multifunctional grips, SPLINEDIT, and the Properties palette.
In addition to these operations, splines can be trimmed, extended, and filleted.

Multifunctional grips provide options that include adding control vertices and changing
the tangent direction of the spline at its endpoints. Display a menu of options by
hovering over a grip. 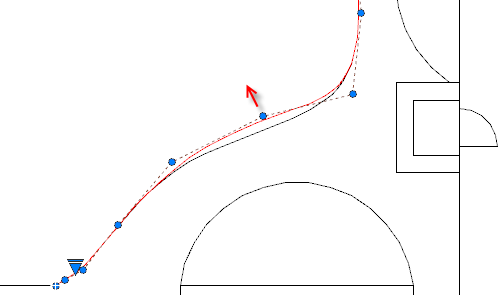 You can insert additional control vertices to a section of a spline to obtain greater
control in that section at the expense of making the shape of the spline more complicated.
The Refine option adds a knot to the spline resulting in replacing the selected control vertex with two control
vertices.

SPLINEDIT provides additional editing options, such as adding a kink to the spline,
and joining a spline to another contiguous object, such as a line, arc, or other spline.
As shown, objects are joined to splines with C0 continuity.

(Not available in AutoCAD LT)

3DEDITBAR displays a gizmo that can move a portion of a spline proportionately, or
change the direction and magnitude of the tangent at a specified base point on the spline. To display a menu of control options, right-click the gizmo.

The gizmo in the illustration is the default setting, which is the Move Point Location
option. The square grip is located at a specified base point on the spline, and is
used to stretch a portion of the spline.

The red and green axis arrow grips constrain the movement of the square grip in their
respective directions.

TIP: Not visible in the illustration is a blue axis arrow grip that points toward you.
This axis is visible in other views such as a 3D isometric view, and can be used to
modify the shape of a spline in 3D.

Click the downward-pointing triangular grip to switch to the Move Tangent Direction
option as illustrated below. Even though the axes of the gizmo change their location,
the base point remains the same. With this option, moving the square grip changes
the slope of the tangent at the base point.

Edit Splines with a Palette

The Properties palette provides access to several spline parameters and options,
including the degree of the spline, the weight for each control point, the knot parameterization method used in conjunction with fit points, and whether the spline is closed.

Trimming a spline shortens it without changing the shape of the portion that remains.

Filleting a spline creates an arc that is tangent to the spline and the other selected
object. The spline might be extended with a linear portion to complete the fillet
operation.

u can edit splines using multifunctional grips, SPLINEDIT, and the Properties palette. … Multifunctional grips provide options that include adding control vertices and changing the tangent direction of the spline at its endpoints. … The editing options available with multifunctional …Spline on the LEGACY MOD menu, you can change the shape of an existing spline by manipulating the points through which it passes (spline points).… Join Ian Robinson for an in-depth discussion in this video Creating and modifying splines, part of Cinema 4D R16 Essential Training.Modified Spline Interpolation Method for. Function Reconstruction from Its Zero- Crossings. Viktorija Solovjova. University of Latvia, 19 Raina bulv., LV-1459, …modified spline technique (MST) has been developed for the smoothing of thermodynamic data with uncertainties in all measured variables. This method, a  …… In this paper we study the convergence behavior of a modified collocation method for the numerical solution of fractional differential equations …Modified Spline Smooth Support …spline for an experimental application. … on effective length, except they refer to it as "helix modification". 2017-06-15