A fillet connects two objects with an arc that is tangent to the objects and has a
specified radius.

FILLET can be used to round all corners on a polyline using a single command. Also,
you can use the Multiple option to fillet more than one set of objects without leaving
the command.

Instead of an arc, you can use BLEND to create a spline that connects two lines or
curves, and is tangent to them.

You can use the Trim option to specify whether the selected objects are trimmed or
extended to the endpoints of the resulting arc or left unchanged.

Control the Location of the Fillet

Depending on the locations you specify, more than one possible fillet can exist between
the selected objects. Compare the selection locations and resulting fillets in the
illustrations. 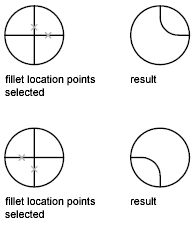 To fillet lines with polylines, each line or its extension must intersect one of
the polyline line segments. If the Trim option is on, the filleted objects and the
fillet arc join to form a single new polyline.

You can also fillet the endpoints of an open polyline by selecting a polyline segment
before you specify the Polyline option. This operation creates a closed polyline.

If you set a nonzero fillet radius, FILLET inserts fillet arcs at the vertex of each
polyline segment that is long enough to accommodate the fillet radius.

If two linear segments in a polyline are separated by an arc segment between them,
FILLET removes the arc segment and replaces it with a new arc segment of the current
fillet radius.

If you set the fillet radius to 0, no fillet arcs are inserted. If two linear polyline
segments are separated by one arc segment, FILLET removes that arc and extends the
linear segments until they intersect.

You can fillet parallel lines, xlines, and rays. The current fillet radius temporarily
adjusts to create an arc that is tangent to both objects and located in the plane
common to both objects.

The first selected object must be a line or a ray, but the second object can be a
line, an xline, or a ray. The fillet arc connects as shown in the illustration.