About Entering Commands in the Command Window

About Entering Commands in the Command Window

Commands are the instructions that tell the program what to do.

There are many ways to initiate a command:

The dockable, resizable command window accepts commands and system variables and displays
prompts that help you complete a command sequence (including commands that were initiated
at another location such as the ribbon). 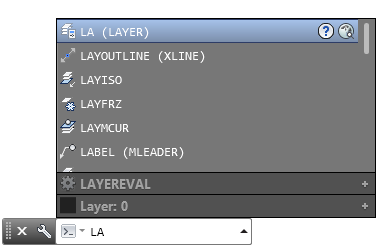 After you enter a command, you may see a series of prompts displayed at the command
line. For example, after you enter PLINE and specify the first prompt, the following
prompt is displayed: 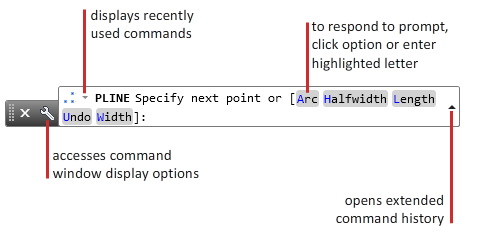 In this case, the default is to specify the next point. You can either enter X,Y coordinate values or click a location in the drawing area.

To choose a different option, click the option. If you prefer to use the keyboard,
specify the option by entering the capitalized, colored letter. You can enter uppercase
or lowercase letters. For example, to choose the Width option, type w and press Enter.

Sometimes the default option (including the current value) is displayed after the
angle-bracketed options:

In this case, you can press Enter to retain the current setting (4). If you want to
change the setting, type another number and press Enter.

NOTE:When you click a ribbon option to start commands that change property settings such
as color, layer, lineweight, dimension style, and multileader style, the command line
prompts are hidden. This reduces the display of unnecessary text.

By default, the name of a command or system variable is automatically completed as
you type it. A suggestion list of commands and system variables that use the same
letters is also displayed. You can control the settings for these features in the
Input Search Options dialog box.

If the automatic completion features are turned off, type a letter on the command
line and press the Tab key to cycle through all the commands and system variables
that begin with that letter. Press Enter or Spacebar to start the command or system
variable.

Some commands have abbreviated names, or command aliases, that you can enter at the command line. For example, instead of entering circle to start the CIRCLE command, you can type c and press Enter. The command Suggestion List (if displayed) indicates the alias in
front of the command name:

Command aliases are defined in the acad.pgp or acadlt.pgpfile.

Interrupt a Command with Another Command or System Variable

Many commands can be used transparently. That is, they can be entered on the command line while you use another command.
Commands that do not select objects, create new objects, or end the drawing session
usually can be used in this way.

To use a command transparently, enter an apostrophe (‘) before entering the command
at any prompt. On the command line, double angle brackets () precede prompts that
are displayed for transparent commands. After you complete the transparent command,
the original command resumes. In the following example, you turn on the grid and set
it to one-unit intervals in the middle of the LINE command.

The program offers several ways to remember which commands to use:

You can change the settings for these options from the command line Customization
button or shortcut menu.

>Commands are the instructions that tell the program what to do. There are many ways to initiate a command: Make a selection on a ribbon, toolbar, or menu.Enter a command in a dynamic input tooltip. Enter a command on the command line. The resizable command window accepts commands and system variables …Enter individual statements in the Command Window while working in MATLAB. Format Output. MATLAB displays output in both the Command Window and the …Command Prompt program and close the terminal window. … You can also use Command Prompt commands to organize files into a directory …Command window is used to execute commands or aliases directly in the Visual … The window used to enter the EvaluateStatement command determines  …Command Prompt is used to execute entered commands. Most of those commands are used to automate tasks via scripts and batch files, perform advanced …Command Prompt commands you might have heard of include … Tip: In Windows 7 and Windows Vista, it's a bit faster to enter command in the …commands you can also type the command name … Simply type exit and press enter and the command prompt will …… Get to a Command Prompt in Windows 10. Click Start. Type cmd and press Enter. Notice: For some commands and options to work in the …command to issue MQSC commands to a queue manager. …. Now you can enter MQSC commands directly at the command prompt. 2017-06-15