Radial dimensions measure the radii and diameters of arcs and circles with optional
centerlines or a center mark.

There are two types of radial dimensions: 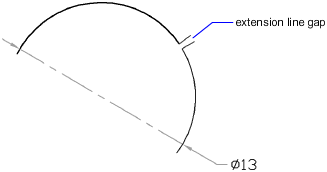 Depending on your dimension style settings, center marks and lines generate automatically
for diameter and radius dimensions. They are created only if the dimension line is
placed outside the circle or arc. You can create centerlines and center marks directly
with the DIMCENTER command.

You can control the size and visibility of centerlines and center marks with the DIMCEN
system variable and in the Dimension Style dialog box. 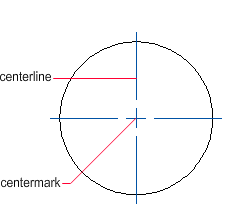 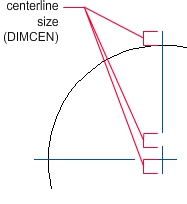 With the DIMJOGGED command, you can create jogged radius dimensions, also called
â€œforeshortened radius dimensions,â€‌ when the center of an arc or circle is located
off the layout and cannot be displayed in its true location. The origin point of the
dimension can be specified at a more convenient location called the center location override.

You can control the default angle of the jog in the Dimension Style dialog box, under
Radius Dimension Jog. 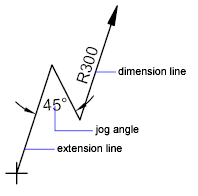 Once a jogged radius dimension is created, you can modify the jog and the center location
override by

NOTE:Jogged radius dimensions can be viewed but not edited in versions previous to AutoCAD
2006-based products.