3DARRAY functionality has been replaced with the enhanced ARRAY command, which allows
you to create associative or nonassociative, 2D or 3D, rectangular, path, or polar
arrays. 3DARRAY maintains legacy behavior.

For 3D rectangular arrays, in addition to columns and rows, you also specify the
number of levels in the Z direction. For 3D polar arrays, you specify the axis of
rotation with any two points in space.

The entire selection set is treated as a single element in the array.

The following prompts are displayed.

Select the objects to array.

Copies objects in a matrix of rows (X axis), columns (Y axis), and levels (Z axis). An array must have at least two rows or two columns or two levels. 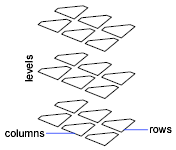 Number of items in the array
Specifies the number of arrayed items.
Angle to fill

Specifies the angle between the first and last item in the array. A negative number
produces a clockwise array rotation.

Controls whether items are rotated as they are arrayed.